This post was written in April 2016, and for some reason I don’t recall I decided not to post it. But, with ABA Techshow around the corner,  and because it remains as true today as then (perhaps even more so) I’ve decided to publish it. This is written from an April 2016 perspective.  Tom Rowe

A random Lawyerist tweet came across my feed the other day that caught my eye … a review of yet another cloud-based legal practice management system (LPMS) – Ciinch. I was intrigued because I’ve been in the legal practice management software business for over 20 years and I hadn’t heard of this system. I’m glad I read the article as it presents a great example, on a number of fronts, of why you have to be careful reading software reviews.

The first paragraph was interesting simply by how wrong it was …

Once, lawyers suffered from a dearth of specialized law practice management software, and if you were not at a firm large enough to get something custom-built, you limped along with Outlook or a clunky, old-school software package. However, the success of practice-management suites like Clio and MyCase have made it clear that lawyers are desperate for something to help them manage contacts, emails, documents, and billing in one package.

If, by “once” the author means before there were computers then I supposed she would be correct. But, for the past 25 years there has been anything other than a “dearth” of LPMS. For a quick history lesson from someone who was right in the middle of it as a consultant and a VP of one of the premise-based LPMS companies, the first such products were introduced in the late 80’s, and Time Matters, Amicus Attorney, and Abacus Law formed a “Big 3” in the 90’s that is quite similar to what is now referred to as the Big 3 in the SaaS world of LPMS (Clio, Rocket Matter, and MyCase). Practice Master, one of the better premise-based LPMS today, and West’s ProLaw became very competitive and highly used over the years. Throw in Legal Files, Perfect Practice, Perfect Law, LawBase, Needles, Prevail, Case Files, and Client Profiles, almost all of which are still marketed and have large user bases, and you’ve had a thriving LPMS industry for almost 30 years.

While it may be easy for people new to this industry to look back on those programs as “clunky and old-school” they were as cutting edge at the time as the SaaS based products are today. Moreover, they were truly innovative in their design and function, unlike today’s LPMS which haven’t added much in the way of substance, just the way the product is delivered to the end user. That’s not to say the new way of delivery is not a wonderful and awesome thing – it is. But, 99% of the core functionality of today’s leading SaaS LPMS was already developed and in use by the early 2000s. Although forced to market against the “old school” programs, the modern SaaS LPMS providers owe a great debt to the pioneers in his area like Bob Butler, Dan Berlin, Judd Kessler, and Ron Collins, who truly defined what LPMS was then and still is now today.

This is important, not purely for clarifying history, but because of what we can learn from it. I’ve enjoyed the excitement that the cloud-based LPMS have brought to this area of legal technology. As the article accurately states, as more and more SaaS LPMS are introduced it has become an “increasingly crowded field.” But, having a bunch of new programs entering the market isn’t new … the same thing happened from about 1998 – 2003. When the first Big 3 were taking the legal technology world by storm you couldn’t go to a tech show where one of the highlights of the show was a shootout between the Big 3. Because of the excitement of the efficiencies and profitability these products generated, dozens of other companies jumped in to take advantage of the technological advances of the time. That’s the way markets work. Not surprisingly, many of these companies failed. Those of us around back then can recall that every time we would go to ABA Techshow or Legal Tech New York (which used to be more for smaller and medium firms) there would be any number of new premise-based LPMS touting all the great things they did, only to be gone within a few months or a year. Sound familiar? It seems that at every ABA Techshow the past few years there have been numerous new SaaS LPMS popping up. Like their premise-based precursors, many of those will fail because there is only so much room for a product that does pretty much the same thing LPMS has been doing for the past 25+ years.

Which brings me to the substantive part of the review. The author accurately states that Ciinch is missing numerous core features that a SaaS (or any type) of LPMS should have:

She then bends over backward to try and give some reason why the program might be a “solid choice.” This makes no sense as everything she states Ciinch does can already be gotten from any of the other far more mature and reputable SaaS LPMS. Had I written the review, based on her observations, I would have concluded that “because the program doesn’t bring anything new to the table, is missing core functionality that many other reputable products already have and have had for years, you should steer clear and go with proven programs like Clio, ActionStep, and others that have far more functionality. Based on history it is likely this program won’t be around for long.”

To bring the story full circle, the Lawyerist review was written in October of 2015 and I am writing this 6 months later in April 2016. Ciinch’s last tweet was in September 2015, and their last PRWeb announcement about how great it is was in July 2015. Their website, at least when I wrote this, is no longer functioning. Google searches for the company and it’s founder reveal no activity since September 2015. I think it is safe to say that rather than a “solid choice,” Ciinch was like many of the new SaaS LPMS that are springing up … they look good because good looking web based programming at a very shallow level is very easy to do today, but really don’t bring much new to the table that the more mature products already offer. I believe the lesson one should take from this is to be wary of puff piece reviews that don’t really dig into a product, and be wary of new LPMS that just popped up. Unless they bring significant substantive innovation to the LPMS model, you are way better off going with an established player in the market.

A final note … I was surprised at how bad this review was. I’ve not been on the site for a while, but my experience has been that Lawerist is a good resource for solo and smaller law firms with a lot of valuable content with valuable and active dialog among the lawyers and legal staff that frequent it. Sam Glover, owner of the Lawyerist, sets a snarky tone for the site and is far more likely to be overly critical of LPMS software than he is to write a puff piece on software that was obviously deficient. So, while I was surprised, it goes to show you have to always be careful when you read software reviews.

We support NetDocuments and the Time Matters internal Document Management Systems (DMS). Both systems let you save Acrobat files using buttons or links in Acrobat to pop up a document profile form.

Fujitsu’s ScanSnap desktop scanners are by far the most used scanner in the legal space. We often have to address the problem that when the ScanSnap software gets installed the default settings are not friendly to the DMS we support. The default settings bring up the ScanSnap management tool, adding a layer of complexity not needed. What you want to happen is for a scanned document to be automatically named (the DMS will ultimately name it, so you don’t care what that name is) and then pop it up in Acrobat. You can then use the DMS buttons and links to save it into NetDocuments or Time Matters.

To configure your ScanSnap for this use case do the following:

Right click on the ScanSnap button in the Task Tray, and select Scan Button Settings… 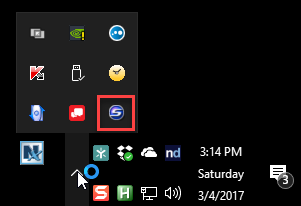 When you the settings dialog first comes up, Use Quick Menu will be checked. Uncheck this checkbox.

Press the Detail button to see the rest of the settings that you couldn’t see on the Quick Menu. 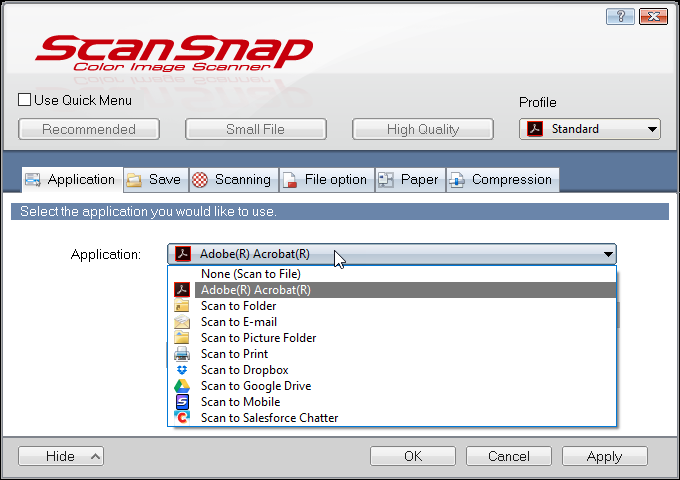 Under the Save tab, select the folder where you want the documents to be scanned to. This is a temporary holding folder as the documents will be saved in the cloud in your NetDocuments repository, or saved and moved to your shared folders in Time Matters. 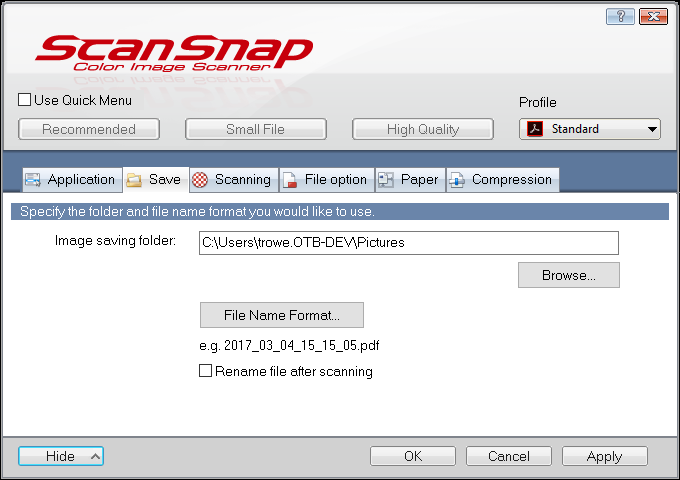 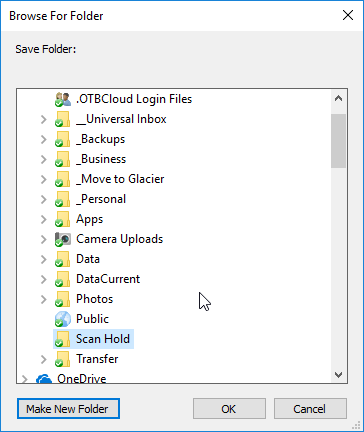 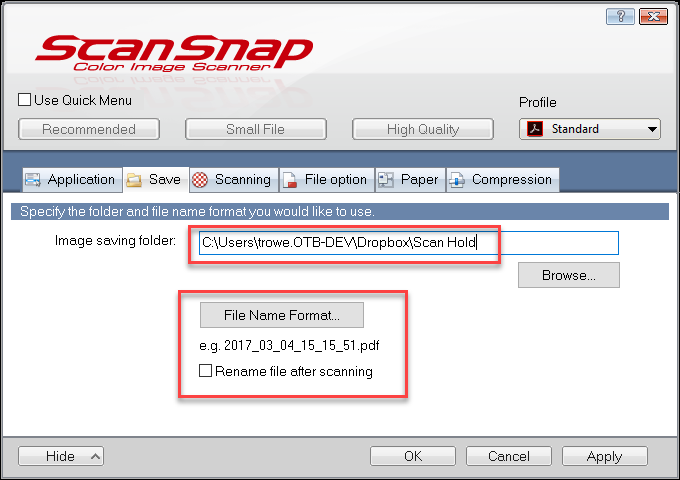 When you press Apply and then scan, your scans will come up directly in Adobe Acrobat.